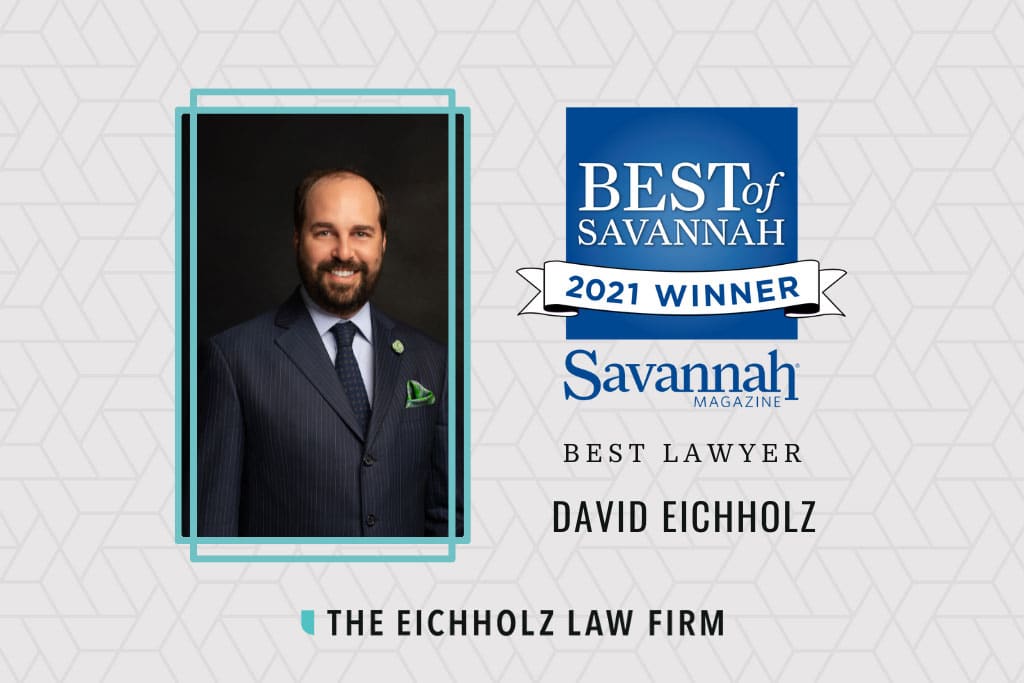 SAVANNAH, GA – For the seventh consecutive year, The Eichholz Law Firm has been recognized by Savannah Magazine readers in the local publication’s Best of Savannah poll. David Eichholz was voted 2021 Best Lawyer and the firm was named runner-up for 2021 Best Law Firm.

“It is an honor both for me personally and for the firm to be recognized with the 2021 Best of Savannah award,” said David Eichholz, Managing Partner of The Eichholz Law Firm. “As a lifelong Savannahian, I have advocated for the injured in our area for over 15 years. I am grateful and humbled to be recognized by the community for this work.”

The Best of Savannah winners represent the very best businesses that serve the greater-Savannah area. They are determined every year by reader votes alone. Only one ballot per person is accepted, and duplicate ballots and those without a verifiable name and address are automatically disqualified.

“David’s passion for advocating for his clients is matched only by his unwavering commitment to serving our community,” said Fatima Zeidan, Managing Partner of The Eichholz Law Firm. “It is a privilege to work alongside David, and the entire team and I congratulate him on this well-deserved honor.”

After completing his undergraduate studies at the University of Georgia and studying abroad in Australia at Macquarie University, David enrolled at the Florida Coastal School of Law. He graduated cum laude in 2007, ranking in the top ninth percentile of his class. Shortly after, he returned to his hometown of Savannah and joined The Eichholz Law Firm. Just five months after receiving his Juris Doctor, he became licensed to practice law in Tennessee. By the end of 2009, David was admitted to the State Bar of Georgia and the State Bar of South Carolina, respectively. His current admissions include the Supreme Court of Tennessee and all State Courts in Tennessee; United States District Court for Northern, Southern and Middle District of Georgia; Supreme Court of Georgia; Georgia Court of Appeals; United States District Court of South Carolina and Supreme Court of South Carolina. David’s relentless fight for justice and the rights of injury victims has earned him esteem as a mentor, a track record of recovering multiple million-dollar settlements for clients and several accolades and awards.

The fights nearest to David’s heart are those for causes greater than him. He is an annual contributor to numerous community organizations such as United Way of the Coastal Empire, Rambam Day School, Jewish Educational Alliance, The Leukemia and Lymphoma Society, Savannah’s Safe Shelter, Savannah Jewish Federation and Chatham Savannah Authority for the Homeless. In addition to teaming up with area blood donation centers for quarterly blood drives, he has made it his personal mission to support children suffering from Sickle Cell Anemia and helped sponsor their annual summer trip to Camp New Hope.

About The Eichholz Law Firm: As a locally owned and operated firm, our team lives and works in the communities we serve. Our clients are at the center of everything we do and our team is focused on delivering results. We are committed to fighting for justice and increased social responsibility in our community. Our objective is to provide expert legal services in an effort to maximize results for clients who have been injured through the negligence of others. To learn more, visit thejusticelawyer.com.

Have You Been Affected by a Hazardous Material Accident at Work or Near Your Home? Unfortunately, hazardous material accidents like the November 7, 2022 incident at Symrise Chemical Plant at Colonel’s Island, Georgia are not uncommon. In...

What to Do After a Slip and Fall

A “slip and fall” or “trip and fall” injury is one in which a person is hurt while on someone else’s property. If you’ve been injured in a slip and fall, you can seek compensation through the courts in what is called a premises liability...